Hanking Electronics is the organizer of China COMET 2021 and was featured in the October issue of CMM Magazine. Hanking partnered with MANCEF in launching a new China chapter and bringing the COMET conference to China. The virtual conference was held online September 16-17 and the live conference will be held in Shenyang, China November 22-23, with a tour of Hanking’s high volume MEMS fab.

China has seen unprecedented growth in microsystem and semiconductor infrastructure in the past decade. This is due to the rise of its automotive and consumer markets and export of smart phones, tablets, drones and other microsystem and semiconductor enabled products. Historically, more than 90 percent of microelectromechanical systems (MEMS) devices such as accelerometers, gyroscopes, pressure sensors and radio frequency (RF) filters have been imported into China for product assembly. Virtually all the MEMS wafers are fabricated outside of the country and imported as wafers, chips or packaged devices. According to customs data, China imported semiconductor and MEMS chips worth US$304 billion in 2019, down 2.6 percent on a yearly basis1. Moreover, the State Council of China has declared that the country aims to increase its self-sufficiency rate of chips to 70 percent from the 30 percent level realised in 2019. This type of semiconductor manufacturing goal and the government funds associated with it have been ongoing for more than a decade. Read the full article on CMM.

Our CTO Doug Sparks will be speaking at the MEMS World Summit in June in response to COVID-19! For more information on this event – https://memsworldsummit.com/

Dr. Douglas Sparks is the CTO at Hanking Electronics, which built China’s largest 200mm pure MEMS fab. Prior to joining Hanking he founded NanoGetters, was the Executive Vice President at Integrated Sensing Systems launching microfluidics products, and also worked at Delphi in the automotive MEMS and integrated circuits.

Need a MEMS solution? Stop by our booth # E4.4555 at Electronica 2019 to learn more about our MEMS turnkey solutions! Or contact our Sales team for more information or to get a quote 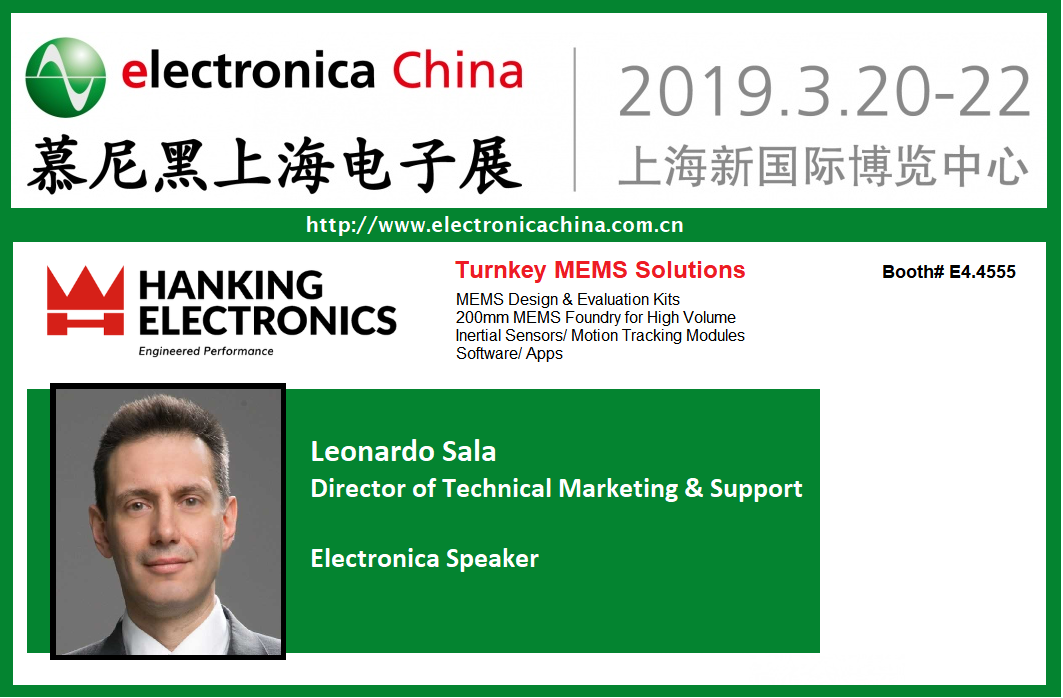 Hanking Electronics will be exhibiting at Semicon 2018 in Shanghai  March 14 – 16 in the N3 Hall.  Stop by our booth to learn more about our foundry services, China’s first high volume Class 100 MEMS foundry. For more information > Foundry Services

Leonardo Sala, Hanking’s Dir. of Technical Marketing and Support, will be a speaker at Electronica 2018 in Shanghai on MEMS technology.  Leonardo will discuss Hanking’s MEMS technology, that includes 3 DoF and 6DoF inertial sensors and China’s first high volume 8″ MEMS wafer foundry.  His speech will address Hanking’s development of its future to become the world leader in MEMS technology. 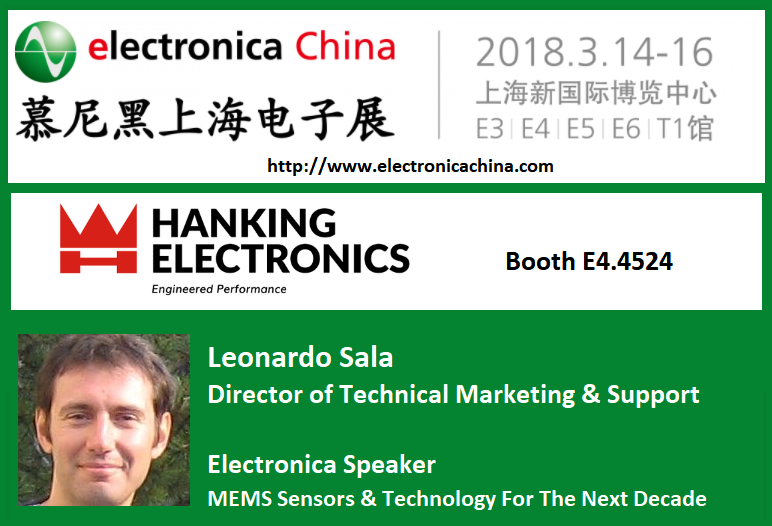